Mika Fox is a member of our congregation who is currently serving in the IDF. This is her most recent letter to us, dated Aug 19, 2014. We’re thinking and praying for you, Mika. Stay safe. 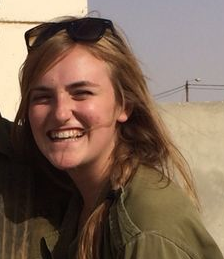 “My name is Mika Fox. I grew up in Tribeca and went to Saint Ann’s School in Brooklyn and I am currently a sergeant in the Israel Defense Forces (IDF) serving as an infantry instructor in the Negev desert.  My original plan to take a gap year before attending college ultimately evolved into enlisting in the Israeli army for a two-year stint.  When not on the army base, I live on a kibbutz near the Jordan border with a group of “Lone Soldiers”, whose families live abroad and who have chosen to leave their countries of origin to serve the State of Israel.  I’m 19 and I will complete my two-year service this October.

I arrived in Israel in August 2012 and two months later began a two and a half month basic training and infantry instructor course learning all there is to know about the infantry of the IDF. After my course, I was assigned a specialty – the Gil missile and completed a two-month intensive course specializing in the missile system.  Immediately after, I began training both reserve and regular infantry soldiers to use the system.  I’ve spent a year and a half traveling all over the country from the Syrian border to the Gaza border to the West Bank and all over the Negev desert, giving soldiers lessons, teaching them on the missile system and training them on a missile simulator on my base, Tze’elim.

This July, I experienced my second military operation since being in the IDF – Operation Protective Edge.  The first was Operation Pillar of Defense in 2012 during my basic training.  Since I was about a month into my service at that time the only way I could help during the operation was to take over guarding my base while the combat soldiers went off to the Gaza border.  However, this summer, during Operation Protective Edge, was a whole different experience, something I never expected would happen during my service.

Before the ultimate ground invasion, hundreds of soldiers came to my base to train in the classroom and in the field. I, along with my team of three other Gil instructors, spent those few intense days, training soldiers at the Gaza border and on our base.

As if the rigorous training wasn’t intense and overwhelming enough, constantly interrupting us were the sirens of overhead rockets.  I had spent most of the past year and a half training soldiers, sometimes under intense conditions on the Syrian border where we heard constant mortar fire and spent hours in bunkers; but this was a completely different feeling, knowing I was the last person for the soldiers to ask technical questions before they went into battle in Gaza.

I felt a great deal of responsibility because I had been training these soldiers for the majority of their service how to use a weapon in safest way.  Now, hours before they would enter Gaza, I had no room to make mistakes and had to try my best to get important information through to them after their many sleepless nights and endless training. The soldiers were exhausted, fed up with waiting for orders and, while trying to do my job, I knew I also had to raise their morale as much as I could.

Among the dozens of soldiers I trained, one was my boyfriend, Daniel, who I’ve been training periodically for a year, along with the rest of his unit, the elite battalion of the Nahal Brigade.  I was lucky enough to see him a couple times before he went into Gaza.

Once the soldiers went in, my work changed completely.  There were no more active-duty soldiers to train since they were all in Gaza or on the border waiting to go in.  All I could think about was how much I wanted to be there to help them.  I felt frustrated and powerless waiting on my base to hear any news.  I constantly worried about Daniel, my cousins and my friends who were all fighting in Gaza, but I was also worried about all the soldiers I’ve trained.  In some way, I felt responsible for each and every one of them and really did care for them all.

I spent the weeks following, taking my phone with me everywhere I went so that I wouldn’t miss a call from Daniel or any of my friends or cousins in the war – reading news updates every half hour, and listening to the radio on my base.

As far as my work in the IDF, every week I spent two days in the Golan Heights and on Mt. Hermon training reserves that had to be prepared to go to Gaza at any time.  They were patrolling the border replacing the combat soldiers who had been sent to Gaza.  Traveling in uniform throughout Israel, from down south up to the north, during that time was intensely uplifting.  I realized that the entire country was connected through a feeling of constant worry for our soldiers that was unlike anything I have sensed before.  Of course not everyone had a son fighting in Gaza; but every Israeli knew someone who was there or knew someone who knew someone who was fighting to make their lives safer.  There was this sense of solidarity that was felt on my base, on the buses, in the cafes in Tel Aviv – it was all throughout Israel.  It’s strange to say, but this feeling made me feel like Israel was my home and all of these people were family… one big family, putting politics and religion aside, all wanting the same thing: bring our soldiers safely home.

Then, on July 19th, my friend Sean Carmeli, a fellow lone soldier from Texas, was killed while fighting in Shejaiya, one of the most dangerous villages in Gaza.  Learning of his death, burying him and comforting his girlfriend Eden (a very close friend and also a lone soldier), and his family, was one of the most emotionally challenging times of my life – the anguish and the heartbreak was overwhelming.  The reality of the war really hit home.  I just hoped that the rest of the soldiers would return home safely.

The following Friday, I received a phone call from Daniel’s mother that he was in the hospital, wounded from a grenade explosion with shrapnel in several areas of his body.  I rushed to the hospital as fast as I could, not panicky, not in tears, but with paradoxical feelings of worry and relief.  I spent all my time between the hospital and my base, juggling my personal life with my job in the army, which overlapped like never before. Fortunately Daniel was released after a few days and is recuperating from his wounds, though he hasn’t yet returned to active duty.

A week later, Protective Edge appeared to come to an end, and the ground forces left Gaza.  My life in the army went relatively back to normal, but my view of my army job had changed.

I now recognize the responsibility I have to teach soldiers something that is critical to the success of their mission and their survival in battle.  I’ve always taken my job seriously, trying to simulate battle while training soldiers in the field, but I never put it into the context of a war, until now.  I’m proud of my army service and what I’ve taught my soldiers over this past year and a half.  While I would never wish for war, I’m grateful that I got to experience how my work influences the soldiers defending Israel and the country unifies during the time of conflict.