The Journey of the Mezeritz Ark to Tamid 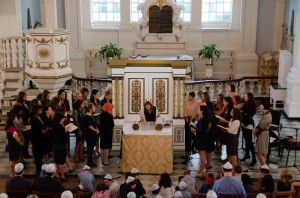 If you don’t believe in destiny, this story may change your mind. If you believe in the unity principle and synchronicity, you’ll love this story – for it’s a living tale about history unfolding in the most mysterious ways – across time and space.

From 19th century Europe to 20th Century Immigrant society of the Lower East Side to modern day, 21st Century revitalization of the New York Urban Landscape in Lower Manhattan.

Here’s how all it began: 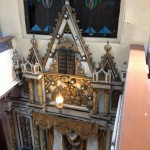 At the Rosh Hashanah New Year services in 2012, Rabbi Levine spoke about the need for our synagogue to create an Ark to hold the Torah (Aron HaKodesh) scroll that we had on semi-permanent loan. He said that we needed a spiritual focus during worship that was Jewish and bold since we meet in a church (St. Paul’s Chapel). He spoke with a few designers and artists about creating a unique Ark but the costs for our young congregation were too much.

Eight months later, Rabbi Levine received a call from a man named Jason Friedman. Friedman was visiting at Rosh Hashanah and heard the call for an Ark. A young architect, Friedman was on assignment for a real estate developer on the Lower East Side to assess whether an old landmarked building on East 6th St and Avenue A was suitable for a condominium conversion. Friedman called Rabbi Levine and said, “I know you need an Ark. There’s one at 6th St on the Lower East Side and they don’t know what to do with it. Can you help?” 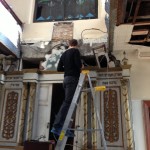 He went to visit the site only to learn that it was the old Meseritz Shul, formerly a vibrant synagogue decades ago built by the emigres from Mesertiz, a town in Eastern Poland. The building was nearly condemned but there was an Ark on the Northern Wall. Two stories high, fifteen feet wide, very ornamental, brittle and delicate. The caretaker of the synagogue told rabbi Levine, “it’s very brittle and we have no idea how it was built onto that wall, but if you think you can help, we would welcome it.” 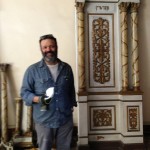 Rabbi Levine brought in a congregant, Salvo Stoch (at left), who runs a business dealing with lost objects and unique and iconic furniture pieces and ornaments from around the world. They went to assess the Ark on Tuesday. The caretaker said, “the building has been sold, the demo team is coming on Monday, if you want this Ark, you need to figure out how to remove it by Friday.” Two days later, they were back with tools, ready to gently remove the Ark. (They also found an old Torah scroll inside the Ark that was covered under papers and old cardboard). 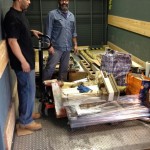 Built with wood in the early 1900’s, the Ark was gently removed in on April 26, 2012 and placed into storage in the Brooklyn Terminal Yards. The Downtown Express and several other news outlets covered this story and while reading the paper one morning, a man named Bruce Salkin said to his wife, “honey, look at this, didn’t your parents belong to this synagogue 60 years ago?” Bruce and his wife Ellen contacted Rabbi Levine to learn more about the story and as it happens in so many life stories, this new finding kindled Ellen’s desire to explore her past and her family’s connection to Mezeritz and to the Lower East Side. 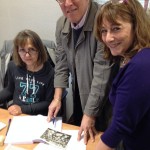 After research at the YIVO institute in NY, the Salkin family found a paper and picture trail that led them to learn that her father had his bar mitzvah in front of that ark (as did Bugsy Seigal). The story got so deep that the Salkin’s, Rabbi Levine, and fellow congregant Jamie Propp decided to travel back to where it all began and in March 2014, the four went to Poland and to the original city of Mezeritz just 100 miles East of Ukraine. 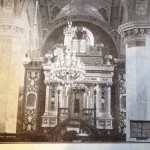 During the research and planning phase of the trip to Poland, they learned that prior to WWII, the town of Mezeritz had one of the largest and most thriving synagogues in Eastern Poland. Today, nothing remains of the old synagogue except a few photos. It was rumored that the florist on the Southeast corner of the town square in Mezeritz had some old photos of the village prior to the War. As destiny would have it, there on the wall of her store, a framed photo of the original ark in the Meseritz synagogue from the 1800’s. 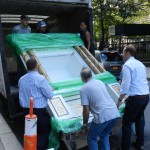 Simultaneously, Tamid found and engaged the right designer that could refurbish and reconstruct this sacred artifact, Sergio Freitas of Move Interiors Corp. Sergio worked on the Ark in Brooklyn and at a wood shop in Queens. The ark was reduced from it’s original size of 15 feet by 20 feet tall to approximately 7×10. The structure was re-inforced and built on a rolling platform because of it’s wight. And once complete, it was delivered it to the Chapel on August 21, 2014. 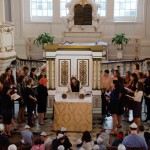 The Ark is now part a permanent installation on the main floor of St. Paul’s Chapel and sits just to the left of pulpit during normal hours. When Tamid gathers for Shabbat and holidays, the Ark is rolled into place, squarely in the center of the room, just beneath the tetragrammaton (emblem with the name of God) and holds the Torah scroll of the congregation. As you will see when you visit the Ark or St. Paul’s, the colors of the Ark and the colors of the pulpit look identical. This was purely by accident, or was it another sign of destiny?

The general public is welcome to visit the Ark when the Chapel is open to the public. Tamid is grateful to St. Paul’s Chapel and to the Clergy and Vestry of Trinity Wall Street for allowing the Jewish community to maintain this unique piece of history; a history that has spanned generations and continents.

We are continually seeking funds to help maintain the Ark. If you can help sustain this Ark, please click here to learn how you can maintain this piece of history .