Call it “Raiders of the Found Ark.”

Two months ago, Tamid, a new liberal congregation that holds services and classes in a variety of downtown locations, began raising money to build an ark to hold its Torah scrolA week and a half ago, Tamid’s Rabbi Darren Levine got an e-mail from Jason Friedman, an architect who had attended Tamid’s High Holy Days services. 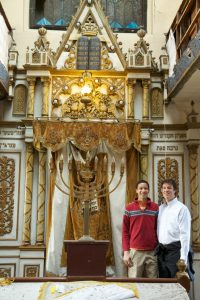 The Orthodox synagogue, which is moving to smaller quarters in the basement, needed someone to take its two-story-high, hand-carved ark away by May 1, or it would be demolished. After a quick consultation with a member who works with historic objects and who said it could be safely extracted and stored, the Tamid board voted to take the ark.

It is “going into safekeeping in storage until Tamid has a home of its own, where it will be refurbished and re-installed,” Rabbi Levine said in an e-mail interview. In the meantime, a few of the “iconic pieces,” such as the lamp, will be used in a “portable ark” for upcoming services and bar/bat mitzvah celebrations.

On Sunday, Rabbi Levine and several congregants, (pictured above), came to see the 100-plus-year-old ark in its original homeAfter Rabbi Levine delivered a brief history of the shul’s founders — the Jews from Meseritz, Poland — the group symbolically took down one piece of the ark. A few local neighbors showed up to pay their farewells.

“Tamid is honored to be continuing the legacy that Meseritch embodies as a symbol of the generations that came before us in Lower Manhattan,” Rabbi Levine said.