At Tamid, we expect every student to participate in a Mitzvah Project as part of their Bar/Bat Mitzvah preparation. Coming of age in the Jewish tradition is about transmitting a range of values to the next generation and while leading prayer and delivering a speech is part of it, walking the talk is another important part. Students in the B’nai Mitzvah Class work all year on a class project. 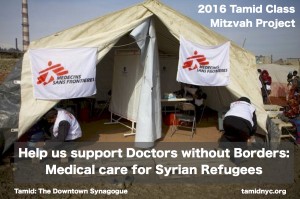 2016 Class Mitzvah Project: Medical Care for Syrian Refugees. The 2016 B’nai Mitzvah Class has selected to raise funds and to create and campaign to educate others about the medical and health issues facing Syrian Refugees. In partnership with Doctors Without Borders, our class will be raising funds to support children, women, and men who face many health problems during their journey/exodus from their native homeland.

The class has set a goal of $7000. They will be present at many Tamid gatherings to raise awareness and collect needed funds; and at the Tribeca Film Festival (April 23) and the Taste of Tribeca (May 21). Please support our students and their efforts by making a tax-deductible contribution.

Learn more about the Medical Relief for Syrian Refugees with Doctors without Borders.

Students in Tamid’s Private training program are encouraged to engage in a mitzvah project that draws on their own interests among the thousands of organizations that seek support, such as Mazon or the UJA Federation of New York, Do a Mitzvah program.

Mazon: A Jewish Response to Hunger has a 3% give back program and is tied into from food banks, food pantries, home-delivered meal programs and kosher meal programs to advocacy groups working at the local, state and national level to expand participation in federal food assistance programs and champion responsible government policies that can prevent widespread hunger in the future. Read more about Bar and Bat Mitzvah “Mitzvah” program.

UJA Federation of New York’s Give a Mitzvah–Do a Mitzvah program enables bar and bat mitzvah students to create their own unique mitzvah project that connects their interests and hobbies to UJA-Federation of New York’s work around the world. Alongside a UJA-Federation mitzvah coordinator, participants brainstorm individual projects and then contribute their time, energy, and a portion (or all) of their gifts to this special mitzvah project. Read more about Give a Mitzvah-Do a Mitzvah and how you can get involved.