The Ten Commandments + The Golden Calf 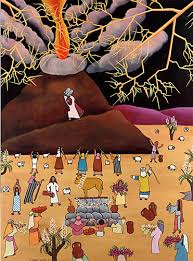 On the third moon after the Israelites left Egypt, they arrived in the desert of Sinai. The Lord God called Moses to the mountaintop and said, “If these people follow my commandments, they will be my treasured People and a holy nation.” Moses came down the mountain after 40 days and nights with the Ten Commandments but the people had betrayed Moses because they built a Golden Calf. In anger, Moses threw down the tablets which had the Ten Commandments. After the People apologized, Moses returned to Mt. Sinai to plead with the Lord God for a second set of Tablets.

In this lesson you will learn the stories about: 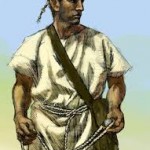 My name is Jethro and I am Moses’ Father-in-Law and Moses is married to my daughter, Zipporah. When Moses left Egypt after killing that man, he found his way to my home. Moses had a lot to learn in order to become the great leader of the people. He learned to have faith and be confident in himself. Then he returned to Egypt to free the People of Israel.
When he came back with the Israelites, I met him again. Moses was dealing with many people and giving judgements on their disagreements and disputes. I said, “why do you act alone? What you are doing is wrong. The task of should not be done by one but by many trustworthy people. Have others decide the disputes and make it easier for yourself, and let them share the burden.”
Moses needed to learn the lesson of sharing responsibility with others in order to be a successful leader.
_______________________________________________________________________________

#2 WATCH this video about Jethro and Moses 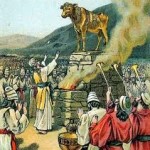 When the Lord God called Moses to the top of Mt. Sinai to receive the commandments, he told the Israelites, “wait here until I return.” Forty days later, Moses had not returned and the people said to his brother Aaron, “We do not what happened to Moses. Make us an idol to lead us.” They gave Aaron their gold and he made a golden calf.

When Moses came down the mountain carrying the tablets of the Ten Commandments, Moses saw the people dancing around the golden calf. He was angry! He threw down the tablets on the ground and they shattered.

Then, the Lord God called to Moses and said, “Carve two new tablets and I will write on them the same words as the first.” He went up to the mountain again and was on it for another 40 days and nights. He came down a second time with fresh tablets and told the Israelites everything he had learned.

#4 WATCH this video about the 10 Commandments

1. I am the Lord God who brought you out of Egypt
2. Have no other Gods besides me
3. Do not use my name for dishonest reasons (in vain)
4. Remember Shabbat and keep the say holy
5. Honor your father and mother
6. Do not murder
7. Do not be unfaithful to your wife or husband
8. Do not steal
9. Do not falsely accuse a neighbor
10. do not wish to posses anything that belongs to your neighbor (no jealousy)

#6 WATCH this Video on Moses getting the Ten Commandments

#7 Respond and React
Now that you have watched the videos, read the story, and learned about Moses’s early life, please respond to these questions in your Tamid Workbook.

1. What did Jethro teach Moses about leadership?
2. Why did the people build a Golden Calf? What was the real reason?
3. List the 10 Commandments
4. What is the most important of the 10 commandments and why?