You will learn about the earliest Jewish history in New York in this lesson. The first Jews arrived in the late 17th century, mostly well off Dutch Jews from Europe that had business interests in the New World. In the 18th and 19th century came the big wave of Jewish immigration of poor Eastern European Jews which populated the Lower East Side (see lesson #62: Lower East Side Jews).

In September 1654, shortly before the Jewish New Year, twenty-three Jews from the Sephardic community in the Netherlands, coming from Recife, Brazil, then a Dutch colony, arrived in New Amsterdam (New York City).

By 1776 and the War of Independence, around 2,000 Jews lived in America, most of them Sephardic Jews of Spanish and Portuguese origin. They played a role in the struggle for independence, including fighting the British, with Francis Salvador being the first Jew to die, and playing a role in financing the revolution, with one of the key financiers being Haym Solomon. The highest ranking Jewish officer of the Colonial forces was Colonel Mordecai Sheftall.

President George Washington remembered the Jewish contribution when he wrote to the Sephardic congregation ofNewport, Rhode Island, in a letter dated August 17, 1790: “May the children of the stock of Abraham who dwell in the land continue to merit and enjoy the goodwill of the other inhabitants. While everyone shall sit safely under his own vine and fig-tree and there shall be none to make him afraid.”

#5 The Jewish Community of New York is Born 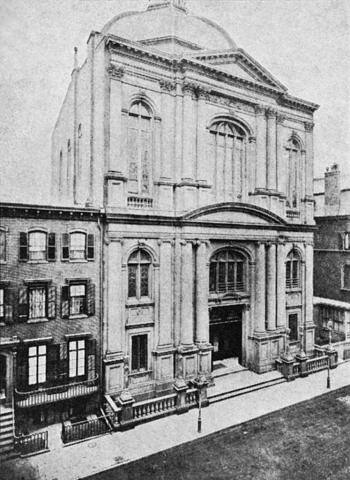 The first group of Spanish and Portuguese Jews arrived in New Amsterdam in September 1654. After being initially rebuffed by anti-Semitic Governor Peter Stuyvesant, Jews were given official permission to settle in the colony in 1655. This marks the founding of the Congregation Shearith Israel. Despite their permission to stay in New Amsterdam they continued to face discrimination and were not given permission to worship in a public synagogue for some time (throughout the Dutch period and even into the British). The Congregation did, however, make arrangements for a cemetery beginning in 1656.

The first Jewish school, Polonies Talmud Torah, was established in New York in 1806