Confirmation in the Jewish religion is not to be confused with Bar Mitzvah. The early Jewish Reformers instituted a ceremony where young Jews who are older than Bar/Bat Mitzvah age study both traditional and contemporary sources of Jewish philosophy in order to learn what it means to be Jewish. The age instituted was older than that of B’nai Mitzvah because some of these topics were considered too complicated for thirteen-year-old minds to grasp.

Confirmation is a rite of initiation in several Christian denominations, normally carried out through anointing, the laying on of hands, and prayer, for the purpose of bestowing the Gift of the Holy Spirit. Roman Catholics, Eastern Orthodox, Oriental Orthodox Churches, and many Anglicans view Confirmation as a sacrament and most Protestant churches also have a form of confirmation. 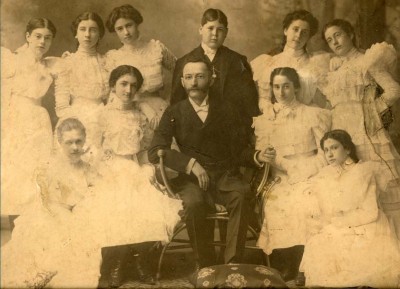 In the late 1800s Judaism developed a separate ceremony, called confirmation, loosely modeled on Christian confirmation ceremonies. This occurred because, at the time, Reform Jews believed that it was inappropriate for Bar/bat mitzvah age children to be considered mature enough to understand what it means to be religious. It was held that children of this age were not responsible enough to understand what it means to observe religious practices. As such, the reform rite of confirmation was developed for age 16 as a sign of a more advanced completion of their Jewish studies.

Topics studied by 15-16 year olds in confirmation deal with Jewish ethics and how to live a life as a Jewish adult.

In the early 1900s, confirmation took on an air of great pageantry, boys and girls wearing robes, bringing flower offerings to the bimah, and participating in dramatic readings and cantatas illustrating themes of dedication and commitment to Judaism. Preparation for confirmation still included a period of study, but public tests and confessions of faith gave way to more normative exams and papers, and speeches reflecting a deeper understanding of Jewish teachings and values. Wide variations exist in congregational practice, from an elaborate synagogue service to a private individual ceremony with the rabbi. Many confirmation classes undertake social action projects as part of their year of preparation. While 10th grade confirmation remains the norm in Reform Judaism, a number of synagogues now mark the event in 9th, 11th, or even 12th grade with the ceremony taking place near Shavuot.

#4 WATCH: Confirmation Speeches from Teens at Am Shalom – Glencoe, IL

1. What is the Jewish ceremony for children at age 16?
2. Near what holiday does Confirmation usually take place?
3. Aside from Jewish teens, what other religions have Confirmation?
4. Why do you think Confirmation is important?
5. If you could create the course of study for Confirmation, what would you include?