Shalom! In this session, you will learn the unique way in which Jews count time and use numbers to suggest something more. . . You’ll learn about numbers, the meaning of the annual year (ex: 5777), and the meanings of “biblical time.” You’ll learn all this and:

FACT: The bible does not speak about time in calendar years, rather only in reference to people’s lives. We might assume stories in history should refer to calendar time but not in the bible.

Example: Abraham’s life:
MODERN TIME: “Diane moved away from home in 1986.”
BIBLICAL TIME: “Abraham left his father’s house when he was 75 years old.”

Example: The Desert Journey:
MODERN TIME: “Their overland journey from New York to California began in 1819 and took 3 years.”
BIBLICAL TIME: “The Israelites wandered in the desert for 40 years.”

FACT: The Jewish year might be 5775 but the English year might be 2014. This teaches there are different ways of counting time and counting years. The Jewish year counting system was started by Rabbi Yossi ben Halafta, a second century C.E. sage. who suggested that the world began 5775 years ago according to the Torah. Modern scientists would suggest that the world began 4.54 Billion years ago according to science.

“God decrees, “Let the days allowed him be one hundred and twenty years.”
-Genesis 6:3 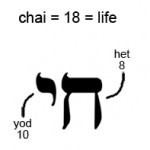 Special combinations of letters can create fun words. For example, Chet is the 8th letter and yod is the 10th letter in the alef-bet. Put them together and you have 8+10 which is “18” but also “Chet-Yod” which spells the word “Chai.” In Hebrew, the word “chai” means “life.” Therefore, 18 is a very important number in Judaism because it symbolizes “life.”