In this lesson you will about two wars that involved Israel and some of the major changes that happened in Israel after each war. You will learn something about the IDF (Israeli Defense Force) and about mandatory conscription in Israel for all citizens.

#4 STUDY: About the Six Day War and the Yom Kippur War The Six-Day War  was fought between June 5 and 10, 1967 by Israel and the neighboring states of Egypt (known at the time as the United Arab Republic), Jordan, and Syria. Relations between Israel and its neighbors had never fully normalized following the 1948 Arab-Israeli War, and in the period leading up to June 1967 tensions became dangerously heightened. As a result, following the mobilization of Egyptian forces along the Israeli border in the Sinai Peninsula, Israel launched a series of preemptive airstrikes against Egyptian airfields on June 5. The Egyptians, whose defensive infrastructure was in a poor state, were caught by surprise and virtually the entire Egyptian air force was destroyed with few Israeli losses, giving the Israelis air superiority. Simultaneously, the Israelis launched a ground offensive into the Gaza strip and through the northern and central routes of the Sinai, which again caught the Egyptians by surprise.

The Yom Kippur War,  also known as the 1973 Arab–Israeli War, was a war fought by the coalition of Arab states led by Egypt and Syria against Israel from October 6 to 25, 1973. With the exception of isolated attacks on Israeli territory on 6 and 9 October, the military combat actions during the war took place on Arab territory, mostly in the Sinai and the Golan Heights. The war began when the Arab coalition launched a joint surprise attack on Israeli positions in the Israeli-occupied territories on Yom Kippur, the holiest day in Judaism, which also occurred that year during the Muslim holy month of Ramadan.[48] Egyptian and Syrian forces crossed ceasefire lines to enter the Sinai Peninsula and Golan Heights respectively, which had been captured by Israel in the 1967 Six-Day War. Both the United States and the Soviet Union initiated massive resupply efforts to their respective allies during the war, and this led to a near-confrontation between the two nuclear superpowers.[49] 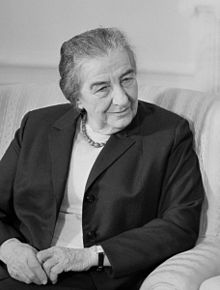 Golda Meir[nb 1] (earlier Golda Meyerson, born Golda Mabovitch,  May 3, 1898 – December 8, 1978) was an Israeli teacher,kibbutznik, politician and the fourth Prime Minister of Israel. Meir was elected Prime Minister of Israel on March 17, 1969, after serving as Minister of Labour and Foreign Minister.[2] Israel’s first woman and the world’s fourth woman to hold such an office, she was described as the “Iron Lady” of Israeli politics years before the epithet became associated with British Prime Minister Margaret Thatcher.[3] Former Prime Minister David Ben-Gurion used to call Meir “the best man in the government”; she was often portrayed as the “strong-willed, straight-talking, grey-bunned grandmother of the Jewish people”.[4] Meir resigned as prime minister in 1974, the year following the Yom Kippur War. She died in 1978 of lymphoma.[5]

Moshe Dayan (Kitaigorodsky) (Hebrew: משה דיין‎; 20 May 1915 – 16 October 1981) was an Israeli military leader and politician. He was the second child born on the first kibbutz, but he moved with his family in 1921, and he grew up on a moshav. As commander of the Jerusalem front in Israel’s War of Independence, Chief of staff of the Israel Defense Forces (1953–58) during the 1956 Suez Crisis, but mainly as Defense Minister during theSix-Day War, he became to the world a fighting symbol of the new state of Israel.[3] After being blamed for the army’s lack of preparation before the outbreak of the 1973 Yom Kippur War, and for his failure of nerve during the war, he left the military and joined politics. As Foreign Minister Dayan played an important part in negotiating the peace treaty between Egypt and Israel.