In this lesson you will study the commandment of Tzedakah and the Jewish practice of making the world a more fair and just world. Giving Tzedakah is not an option, it is obligatory in Judaism. Why do you think it’s an obligation? Let’s explore together and learn about Maimonides levels of tzedakah. 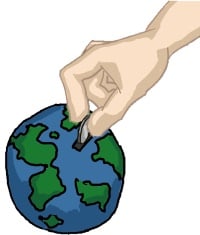 Tzedakah [tsedaˈka] צדקה‎ is a word meaning justice or righteousness but commonly used to signify charity, hough it is a different concept than charity because tzedakah is an obligation and charity is typically understood as a spontaneous act of goodwill and a marker of generosity. It is based on the Hebrew word (צדק, Tzedek) meaning righteousness, fairness or justice, and it is related to the Hebrew word Tzadik meaning righteous as an adjective (or righteous individual as a noun in the form of a substantive). In Judaism, tzedakah refers to the religious obligation to do what is right and just, which Judaism emphasizes are important parts of living a spiritual life.  Unlike philanthropy or charity, which is completely voluntary, tzedakah is seen as a religious obligation, which must be performed regardless of financial standing, and must even be performed by poor people.

#2. STUDY THIS: THE JEWISH SAGES

The Jewish sages taught that giving tzedaka was one of the greatest values and the Talmud contains guidelines for contributing tzedakah. Giving 1/10th of one’s income is average whereas giving 1/20th is considered miserly. How a person gives tzedakah is also important, for example, one should not give it in a way that would shame someone.

Moses Maimonides was a legendary Jewish philosopher in the Middle Ages. He listed Eight Levels of Giving, as written in the Mishneh Torah, Hilkhot matanot aniyim (“Laws about Giving to Poor People”), Chapter 10:7-14:

1. Why is tzedakah an obligatory commandment and not charity?
2. What is the English translation for tzedakah?
3. How does giving tzedakah make the world a better place?
4. Where do you give tzedakah? Why?
5. Is tzedakah an important value to you? Why?