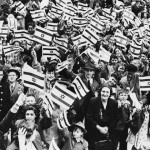 #1 KNOW THIS:  Useful knowledge and dates

May 14, 1948. Day that Israel became a Modern Nation. Israel Independence Day
David Ben-Gurion. First Prime Minister of Israel
Star of David is on the Israeli Flag
‘HaTikva – The Hope” is the National Anthem of Israel

#2. STUDY THIS: About David Ben Gurion 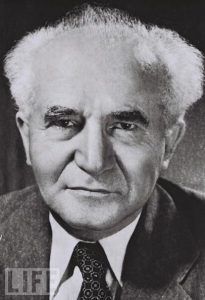 Ben-Gurion’s passion for Zionism, which began early in life, led him to become a major Zionist leader and Executive Head of the World Zionist Organization in 1946.[6] As head of the Jewish Agency, and later president of the Jewish Agency Executive, he became the de facto leader of the Jewish community in Palestine, and largely led its struggle for an independent Jewish state in Palestine. On 14 May 1948, he formally proclaimed the establishment of the State of Israel, and was the first to sign the Israeli Declaration of Independence, which he had helped to write. He became known as “Israel’s founding father“.[7]

Ben-Gurion served as Israel’s first Prime Minister and Minister of Defense. As Prime Minister, he helped build the state institutions,presiding over various national projects aimed at the development of the country. He also oversaw the absorption of vast numbers of Jews from all over the world.

In 1954 he resigned as both Prime Minister and Minister of Defense, although he remained a member of the Knesset. He stepped down from office in 1963, and retired from political life in 1970. He then moved to Sde Boker, a kibbutz in the Negev desert, where he lived until his death. Posthumously, Ben-Gurion was named one of Time magazine’s 100 Most Important People of the 20th century.

#6 STUDY THIS: Why is the Star of David on the Israel Flag? 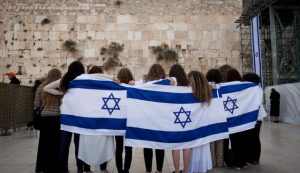 The flag of Israel was adopted on October 28, 1948, five months after the establishment of the State of Israel. It depicts a blue hexagram on a white background, between two horizontal blue stripes.

The blue colour is described as “dark sky-blue”, and was designed for the Zionist Movement in 1891. The basic design recalls the Ashkenazi Tallit, the Jewish prayer shawl, which is white with blue stripes. The symbol in the centre represents the Star of David (“Magen David”), a Jewish symbol dating from late medieval Prague, which was adopted by the First Zionist Congress in 1897.

The blue stripes are intended to symbolize the stripes on a tallit, the traditional Jewish prayer shawl. The portrayal of a Star of David on the flag of the State of Israel is a widely-acknowledged symbol of the Jewish people and of Judaism.

1. What date was Israel declared a country?
2. Who was the 1st Prime MInister of Israel?
3. Where was David Ben-Gurion Born and what languages did he speak?
4. Why is the Star of David on the Flag of Israel?
5. What is the name of the Israeli National Anthem?